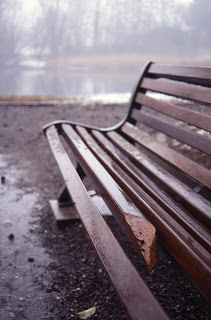 I had always wondered about those life questions that people found so cliche but knew they thought about too: Who are we? Why are we here, where did we come from, and where are we going?

However, I never really acted on those questions. I was baptized Catholic, but never active in that faith. I grew up as a precocious little kid, always wondering and analyzing. My mother and father split up while I was still young. At about age 7, I moved with my mom and her then boyfriend, and later husband. He was verbally and physically abusive to both of us, but looking back on it I forgive him now, because I know those trials made me the person I am today. Later on in my pre-adolescence, my mother and I started attending a Baptist church, and we enjoyed it. It was in lamens terms, and was rather family oriented. I remember one day as I was in Vacation Bible School, the teacher had us all gather round and close our eyes. She asked something like, "if anyone would like to recieve Jesus Christ as their Lord and Savior, please raise your hand." I thought about it, and did it. She then had us open our eyes. It turned out I was the only one. She later talked to me and my mother about how special that was. I still didn't realize the meaning of it, but would later learn that that is what they felt allowed a person to recieve salvation, through such a simple act of faith.

Much later into my teens, after having moved around various times and not going to any church, I found myself going downhill. My mother had left the man I lived with for so long and had found another, who was nice to her, but for some reason it didn't matter to me. It got so bad that it was to the point where I was almost always thinking negative. If you looked up the word pessimisstic in the dictionary, you would have found a picture of me there. I just didn't see the point to life, and was so unsure of myself and who I really was. I had gone through various ups and downs, at one time even smoking pot and cigarrettes, though I luckily stopped that just as soon as I had started.

That's when things started to happen. I was probably about 15. It was 2006. My uncle died at no more than 35 years of age, and it hit me like I never would have imagined. I started wondering why it would happen, and if there really was something beyond death. It was around that same time that I heard some of the most beautiful music I had ever heard on tv one day. It was an English boy choir named Libera. I was instantly captivated with it and found its celestial music comforting in a way the world just wasn't. Even still, I was stubborn in my ways and unhappy with what I felt life had dealt to me.

2007 came. One September night, my mother, the kids, and I, had walked back from the deli to the downtown area of our city at night. We sat on this bench that was missing a piece of wood. It was then that I saw them. Two college aged kids, in black suits and white shirts and ties, walked up to us seemingly out of nowhere. They asked if they could share a message with us, while explaining that they knew it could be strange to talk to two people you didn't know. God Bless her heart, my mother accepted their invitation. They walked away and we made our way to the house.Their names were Elder Hancock and Elder Kelsey.

They started teaching all of us, but it got to the point where it was just me. I was fascinated with what they taught, especially the plan of salvation and the idea of a young boy getting a heavenly manifestation simply because of a prayer of faith. It all made sense to me. It answered those life questions that I had pondered for so long. They told me to pray about the Book of Mormon. I remember reading it for hours on end, so much so that my mom would complain that I had become a hermit crab. I didn't realize it at the time, but I felt the Spirit each time I read. Finally it was December, and they commited me to be baptized on the 15th of that month. I remember praying to know if I should be baptized after having repented, and getting an answer in such a vivid manner that it was undeniable. Elder Kelsey was there with me in the water, and he raised his hand to the square. I looked up out of the font and saw my mother and father there. As that wonderful, loving man said the prayer, I felt a feeling so strong, so pure, so full of love and light that it took over my whole frame. My face made one of the biggest smiles I could have ever made. I knew at that moment that my sins were forgiven me, and that I was in the right Church.

It has been quite the journey in these past few years, but the memory of that Spirit I felt at baptism has never left me. I think of how my whole demeanor and outlook on life has changed, done a whole 360, and how even my mother can attest to the great change of heart that I have undergone. I have never been more happy in all my 17 years of life, even with all the good and bad that I go through in this life. I know I was with my Father in Heaven before I came here. I know that I was placed here on this earth for a reason, and that if I continue to follow His guidance, and use the Atonement of my Savior Jesus Christ in my life, that I can be with Them again. I may never be sealed to my earthly mother and father, but I know that they can recieve the same blessings that I have, whether here or in the next life. I know they love and support me. But most of all, the thing that keeps me going is the sweet knowledge that my Heavenly Father loves me. That is what has made all the difference. I so testify of these things, in the name of Jesus Christ, Amen.
Posted by Pokemon at 1:25 PM 4 comments:

Half Way In and Half Way Out

I have been a member all of my life and yet did not have a strong family in the church to follow. All of my life I had been trying to find myself in all of the wrong ways. My mom would bring us to church while my dad smoked and drank. Being half way in and half way out was a real challenge. I wanted to be a good member but for some reason the draw of the worldly things were stronger than the gospel.

I joined the air force to get away from my parents and physical abuse I had grown up with. Only after joining did I realize that I jumped from the frying pan into the fire. After serving a year remote in Greenland I arrived at my new base in Las Vegas. I decided it was time to marry and being somewhat active in the church I married a local young lady. The funny thing is when we were being married I felt that it was not right thing to be doing. After six years of trying and not being happy, my wife asked for a divorce. I knew she was right in asking for it. I had been abusive and very angry, really not knowing why.

I took it and ran with it. I was sorely tempted by satan to follow him many times but I saw that it was just a façade. I realized that to be happy I had to change. After going to church on Easter Sunday I saw this young lady walking out of church and the spirit told she was the one I could trust. Trust for me was a major issue in my life, being raised in a dysfunctional home it was hard to feel any kind of love or peace without strings attached or always wondering when the bottom would fall out.

Three months after my divorce we were married in the Salt Lake temple. I vowed that I would never be the reason for another divorce and that I would do everything I could to make things right. After being married for 25 years and getting counseling for myself for 5 years I am happy to say that although life has been hard I am happier now than I would ever thought possible. I was able to break the cycle of abuse I received so that my three children would never go through what I had. The spirit has spoken to me many times and as I struggle with life and issues I know that my Heavenly Father will continue to be with me throughout all of my life. My wife was a Godsend to help me through the hardest times of my life. I couldn’t have done it myself. With her patience and unconditional love we have made a life for ourselves centered in the Gospel.

Life is still hard, however the Lord does answer prayers and I know that he knows who I am. I have learned that I do have a father in heaven and even though I don’t always feel him, I know that he is there. One incident that I remember was when I was 12 years old and had just been thrown out of the house. I remember telling Heavenly Father that if this was all there was to life please take me now and let me die and return to him. The spirit of the Lord came to me and said that I was to rise above all of this and that I was better than that. From that time forth when things got real bad I would remember that feeling and press on.

Through revelations and scripture study I have come to realize that there are many ways to fulfill a mission here on earth. Through genealogy I have seen my ancestors receive the Gospel and know that my mission here on earth was to save my ancestors and break the cycle of abuse I grew up with. I have come to realize that we all have missions to serve and that as we finish one mission the Lord will give his children greater opportunities to grow and learn about him. The trials are hard but I have learned to trust in the Lord and seek him out for strength and wisdom in all things.

I went from being a proud selfish angry person to a loving caring husband and father. I thank God for the patience and love he has shown me throughout my life and I can hardly wait to be with him once again.
Posted by Pokemon at 8:29 PM 2 comments:

Send Me Your Conversion Story

My hopes are that as we read and share these stories we all can learn, grow, and recieve direction and support in our own processes of conversion.

If you would like to share your story you can send your submission to becominglds@gmail.com. Please put the word "Conversion" in your subject line and specify what name you would like to have associated with your story. This can be your real name, a nick-name, or even anonymous. If you would like I am also willing to add a link back to your personal blog or website if it coincides with LDS standards.

Thanks for your stories, experiences, and testimonies.